Cookie preferences
This website uses cookies, which are necessary for the technical operation of the website and are always set. Other cookies, which increase the comfort when using this website, are used for direct advertising or to facilitate interaction with other websites and social networks, are only set with your consent.
Configuration
Technically required
These cookies are necessary for the basic functions of the shop.
"Allow all cookies" cookie
"Decline all cookies" cookie
CSRF token
Cookie preferences
Currency change
Customer-specific caching
Individual prices
PayPal payments
Selected shop
Session
Comfort functions
These cookies are used to make the shopping experience even more appealing, for example for the recognition of the visitor.
Note
Statistics & Tracking
Affiliate program
Google Analytics / AdWords
Track device being used
Categories
Information 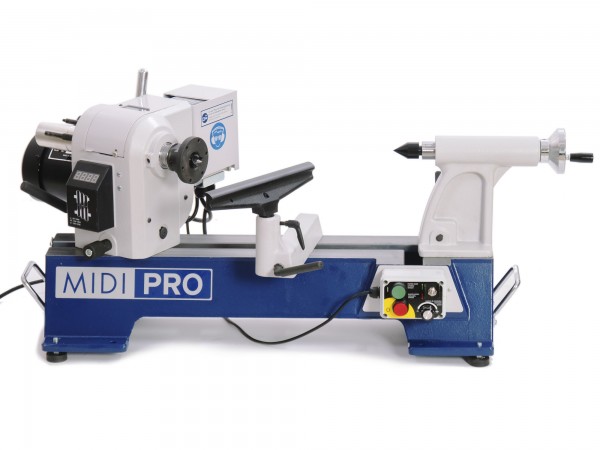 It can be bolted to a benchtop.

Bex ex will fit on the side or end to increase the spindle length and is an optional extra to the lathe.

This is a follow up to my previous comments....I have now had a good chance to use this lathe for a while now and I really, really wish I had known about it a long while ago. I know it has been the most expensive lathe I’ve bought but if I knew then what I know now I would have stumped up the extra and got one! It’s got a really good control over speed and I can get it turning really slow so I can paint on colours and other finishes with great control. Within the same belt setting I can get it to just short of 2000 rpm which is fine for most things. The sliding and rotating head stock and motor is so damn useful for me especially because of the smaller space I have. The add on lathe extension on the side to take the banjo is so useful and I must admit I’m chewing over getting the quick change-over plates as sometimes it catches my gouge handles as I have it in position all of the time. It seems so sturdy and feels like it’s got the “wumff” for anything I’d be involved in! Overall I’m really happy with it and if I win the lottery I definitely would be looking at the Stratos range!!

The only midi sized lathe with full sive lathe features!

I wanted to upgrade my hobby rated midi lathe which lacked the power to turn a bowl it claimed to have the capacity to turn. Looking at full-sized lathes, the features I liked were the swivel headstock and the movable control panel. However, a full-sized lathe would mean something in my shop would have to go. So, sticking with a Midi lathe would be better for me.

I considered a couple of cheaper lathes neither had the movable control panel. One didn’t even have the self-ejecting tailstock you find even on entry-level machines! I have to say the 100mm stroke of the Midi Pro tailstock is great, saves keep shuffling the whole tailstock forward. So, for me, the extra £200 was worth it to get the 'grown-up' features. To my way of thinking it was the only midi sized full-size lathe out there!

I’ve turned a 12” bowl on it and the lathe had more than enough power to deal with it. Even though it is a fairly heavy lathe for its size, the 12” bowl had unbalanced grain so I found bolting it down to a solid bench that’s bolted to the wall was necessary (The Midi Pro weighs 65Kg compared to at least 150Kg of a full-sized lathe). It runs very quiet as you’d expect, has plenty of power, solid build quality, great tailstock and the motor doesn’t lurch into action, it speeds up slowly. All round a pleasure to use.

Dear Simon, just wanted to say thank you for the extremely efficient service with the delivery of my Midi Pro lathe and bed extension. Super quick and well packed, and delivered well too, on a mini pallet by a chap with a pallet truck.
Lovely lathe and will help me so much as the sliding and angling head stock means I can work without straining my back!! I suppose I should say thanks To Ed Oliver as it was his YouTube demo of the lathe which inspired me!